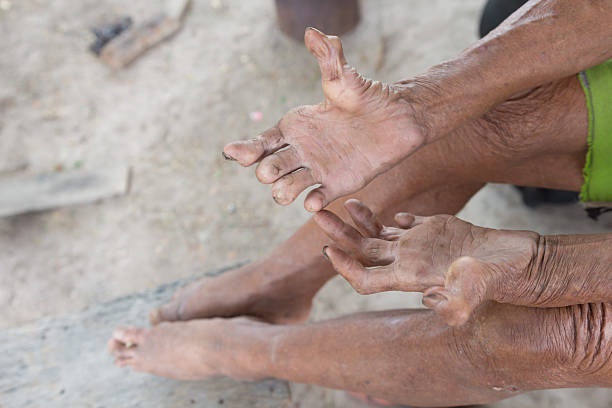 Let me explain … While God has allowed me to go to Africa twice to work alongside and support the vision of other ministries, my earliest prayer to go to Africa was because I desired to go love and minister to those trapped by the bondages that come with Hansen’s.

The door has not opened in that area and it has been so long ago that I prayed those prayers. There is a tendency to think we have missed it. There is a tendency to just quit talking about it. In fact most of you don’t know this about me…but now you do. And you should know also that deep in my heart I do still believe, in God’s timing, I will be involved in some way in this very specific Gospel work. We do tend to forget…but God…He reminds me every single 2/22 when we come to this passage!!!

Tens of thousands of people in our world still suffer from leprosy. This bacterial infection not only affects the skin and destroys nerves, but it also brings incredible, unbearable shame for many who get sick.

Because the disease affects the nervous system, the areas of a person’s body affected with leprosy become numb to many things that ordinarily cause pain. When people suffering from leprosy no longer feel pain, they easily injure themselves. These injuries can become infected, resulting in tissue loss. Ultimately, people with leprosy can lose portions of their fingers, toes and even limbs.

The social stigma can be devastating—perhaps even worse than the disease itself. In their time of need, men, women and even children may be expelled from their homes and shunned by their community when leprosy is discovered on their bodies. Sometimes even those that do not have this disease are ostracized and required to live separated because a member of their family is diagnosed.

Leprosy can be cured without permanent damage if medical help is sought immediately. Unfortunately, the shame and social stigma surrounding the disease can cause leprosy to be viewed not as a curable disease but as a curse. In remote places and among the poor, diagnosis and treatment often come too late.

It is found in parts of Angola, Brazil, India, Mozambique, Nepal, and Tanzania and is still prevalent in some countries such as Madagascar, Nigeria, DR Congo, South Sudan and Burkina Faso.

Look at the Pictures

I highly suggest that you google “leprosy” and look through some of the images to see the effects of this disease that we read about today in scripture. It will give you a picture of not only of the potential affects of the diagnosis but also why precautions that seem so harsh to those of us in the modern western world had to be made in Bible times to prevent the disease from spreading.

Once you have seen the pictures and read in Leviticus 13 the laws regarding leprosy suddenly scriptures like Matthew 8:1-4 really come to life. At least it did for me…

“When he was come down from the mountain, great multitudes followed him. And, behold, there came a leper and worshipped him, saying, Lord, if thou wilt, thou canst make me clean. And Jesus put forth his hand, and touched him, saying, I will; be thou clean. And immediately his leprosy was cleansed. And Jesus saith unto him, See thou tell no man; but go thy way, shew thyself to the priest, and offer the gift that Moses commanded, for a testimony unto them.”

I am crucified with Christ: nevertheless I live; yet not I, but Christ liveth in me: and the life which I now live in the flesh I live by the faith of the Son of God, who loved me, and gave himself for me. ~ Galatians 2:20